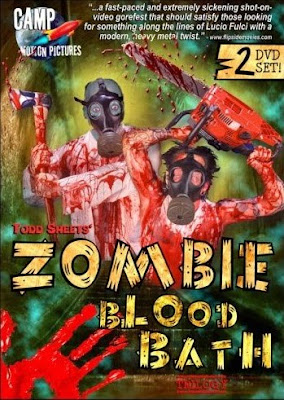 DVD. I should have known that after suffering through Zombie Bloodbath

and Zombie Bloodbath 2: Rage of the Undead

(1995), that there was no way that a decent movie was about to follow. Zombie Bloodbath 3: Zombie Armageddon

Plot/ A bunch of zombies that are used by the government to fight in a major war in the near future get launched into space. The space shuttle gets caught in a time warp and returns to Earth in the present day. Naturally, the zombies get loose and terrorize a motley assortment of folks who are trapped inside a high school.

I feel like I am in a time machine, everything I wrote in my last two reviews about this trilogy is the same. This movie is an improvement from the first two flicks on many levels. Unfortunately, some of it also falls way off in comparison. The plot I found hilarious, and actually a decent idea, the gore was about the same and again there was some good character development. However, the dialogue in this film was even worse on this one than the others and the acting and script were about the same. Let me just say I am not easily insulted by language, hell, I spent 20-years in the US Navy and have heard my share of language, yet, I was truly turned off by the amount of unneeded profanity in the film. It was everywhere and definitely unwarranted. In the end, some of it had me rolling and I think there could be a lot worst attempts at the zombie genre. Will I watch it again? No, probably not, but, I am glad I experienced it (even if it was painful). 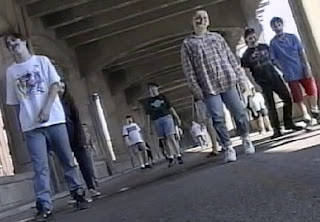