Zombie and CSI - One Week Away 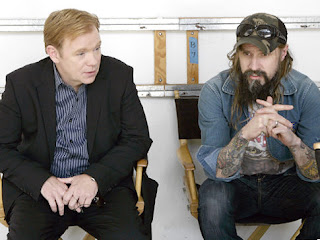 I am not a huge fan of CSI Miami, but when I saw that they brought Rob Zombie on as a guest director for their March 1st episode, I was at least intrigued to watch it. Zombie's work has been really hit and miss with me. For everything that I enjoy (Devils Rejects), there is stuff that drives me insane (Halloween II). Plus, to hear he may be redoing The Blob... Ugh!
In this episode (from the press release) entitled, "L.A." - Horatio and Delko must travel to Los Angeles when a secret from Jesse's past may allow a killer to go free, on CSI: MIAMI, Monday, March 1 (10:00-11:00 PM, EST on CBS.  To help complete the environment that he want he brought along guest stars including Zombie's wife Sheri Moon Zombie ("Halloween") as a Los Angeles photographer; William Forsythe ("Halloween") as the Los Angeles Police Chief, Malcolm McDowell ("Heroes") as a sleazy lawyer defending the murder suspect and Michael Madsen ("Kill Bill") as a bodyguard to the murder suspect.
Even after watching the trailer, I am torn (especially when I discovered it was going to take place in Los Angeles...