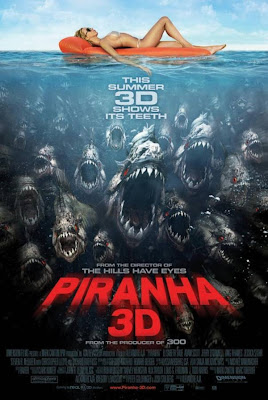 After a few days at rebuilding the living room after moving into the HD age, it was time to sit down with a few flicks. My first choice on the new TV set was the 2010 remake of the 1970s Roger Corman

Plot/ After a sudden underwater tremor sets free scores of the prehistoric man-eating fish, an unlikely group of strangers must band together to stop themselves from becoming fish food for the area's new razor-toothed residents. 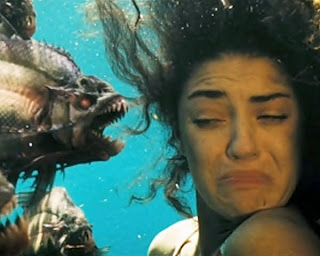 From the first time I heard of this remake, I really did not expect much. Honestly, I got more than I expected. Yes, the plot, script, acting and some of the CGI was off, and seemed Sci-Fi Channelish at best. However, for me the boobs, comic moments, nudity and gore at least made it an enjoyable hour and a half. Plus, seeing Richard Dryfuss on the water was pretty funny, not Bill Murray funny, but funny. In the end, this is far from a great flick, but if you like blood, guts and boobs, you should enjoy it at least a little. I at least enjoyed watching my wife jump at the ending!