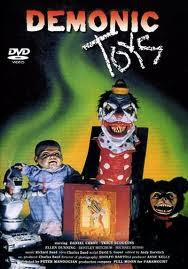 Two rooms are totally complete with cleaning and removing the last remnants of the past three years here in , and it was time to sit down for a few and cool off. While sitting here, I decided to try and catch up on some of the movies I have watched over the past couple of weeks. This entry, the 1992 Satan needs reborn flick, Demonic Toys. 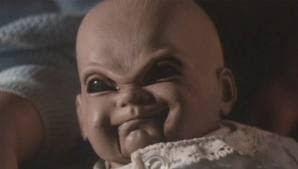 Plot/ A botched bust on a pair of arms dealers inadvertently leads to the raising of a sixty-six-year-old demon with the power to bring toys to life as his personal minions. The demon is looking for a body to inhabit so he can increase his powers, and it just so happens that one of the police officers is pregnant with the ideal host. As the murderous toys close in on their victims, the officer must not only fight for her life, but for the soul of her unborn child. 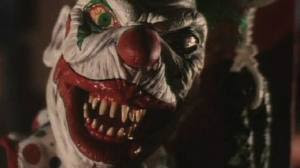 To me, this is one of the best and most entertaining low-budget offerings from Charles Band and Full Moon Entertainment. Yes, the acting is uneven, the plot has some holes and there is not much gore, but it is 90 minutes of entertainment that runs from hilarious to violent. The soundtrack works creating a dark and atmospheric mood, and while special effects are not great (although some are interesting), what horror fan could not LOVE the demonic toys, they are awesome! Sure, like all of the flicks from Full Moon, this one is not for everyone. But, fans of cheesy horror should get a kick out of it!