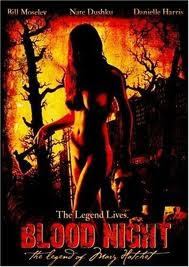 As February starts winding down (still waiting on a picture of my Exorcist Birthday Cake), I decided to take a couple days away from the computer.  However, with it being Friday, and snow in the forecast, I ran to the video store for some flicks for the upcoming week. Before I get to those, it was time to finally sit down and finish the last movie from the previous group, the 2009 slasher starring Bill Moseley, Blood Night: The Legend of Mary Hatchet.

Plot/ A group of teenagers celebrating Blood Night, the anniversary of the death of a local axe murderer, Mary Hatchet, suddenly find themselves face to face with the realities of her haunting. As they run from the bloody rampage left behind, they will need to survive the night to expose the truth behind the legend of Bloody Mary. 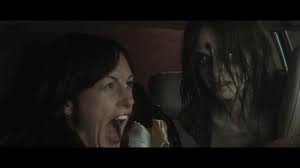 Ahhh, hitting the low budget horror section again (one of my favorite venues). By now, anyone reading about this (or interested in) this movie should already know that it is a B-movie, and it suffers from many of the flaws that permeate through this genre. Really, this one follows the low budget blueprint to a T, featuring a clichéd story, predictable scares, blood splatter and gratuitous nudity. Yes, the opening sequence is decent (and bloody) and the flick is rather entertaining, but it is really nothing to get excited about. The acting is uneven, the gore (while bloody) is rather tame and the ending was unsurprising (although the parts leading up to it was actually funny). In the end, this one is nothing new and fits right into the genre. While not for everyone and far from perfect, I have seen A LOT worse. Check it out if you want, I am sure you will feel the same. 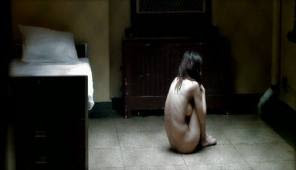