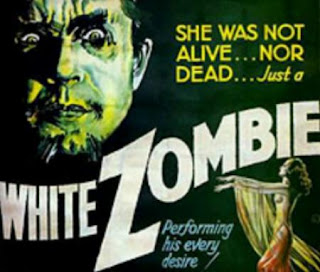 White Zombie  is one of the great unheralded horror classics of the 1930's and unfortunately, it is almost forgotten today, overrun by the modern flesh eating creatures that cloud the true history of zombie lore. In fact, White Zombie may be the first and oldest surviving zombie movie ever made. Unlike the modern movies of the genre that we grew up on, or can see today, these traditional zombie characters are not evil in themselves craving brains and devouring everything in their path. Instead, they are mindless wanderers, controlled by an evil shaman, who must be destroyed to save the zombies from their helpless slumber.

Actually, the characters in this movie do a great job at portraying the creepy zombies that were created in this masterpiece. They set a dark and uneasy mood throughout the film, a perfect backdrop for the voodoo-like overtones and rituals that take the film to another level. Unfortunately, the years have not been kind on this movie. For many years the film sat, tucked away, lost like many classics of yesteryear, making restoration a tough task.

Still, White Zombie, is a must see for fans of early classic cinema and historic zombie ventures. The story is very intriguing and sad, yet, told in an extremely attractive way; especially the ending, which I found fantastic and actually quite tense. In the end, it is everything that Revolt of the Zombies, is not. One more of a reason that so many people are disappointed by that specific effort put forth by Halperin Productions, who worked magic with a tiny budget on this film, creating an atmosphere full of flair and imagination.

Some of the visuals created in this movie, like the opening scene of the burial on the road or the sugar mill worked by zombies, stand tall as tremendous accomplishments on film. One of my favorite settings was the hillside graveyard, a perfect set for any movie of the period or today and the music crafted by Xavier Cugat is absolutely perfect for the mood and countenance.

Bela Lugosi is marvelous in his role as the dark voodoo prince, Murder Legendre, the supernatural force that controls his followers’ every move. Personally, his performance is at least on par, if not better than his role as Count Dracula. To me, Lugosi was at his best playing a villainous role, or at least a devious role like in the 1944 horror classic, One Body Too Many. always at his best in roles like these and just like in "Dracula" he is once Throughout this movie, the Halperin’s do a great job, focusing and cutting in split screen shots of Lugosi’s infamous stare, a trademark that transcends generations. For the Lugosi fans this movie is an absolute must!