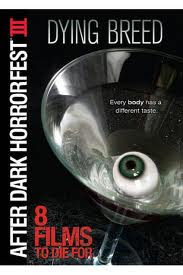 As the snow fell last night, I ventured back into the After Dark Horrorfest

. This time, being a bit of a Cryptozoology and Folklore nut, I chose Dying Breed 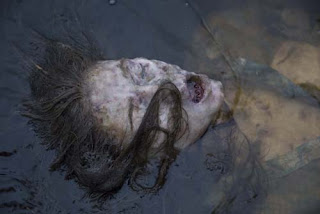 Plot/ Between 1788 and 1868, Australia served as a penal colony for the British Empire and Tasmania was the most feared. The prisoner Alexander "The Pieman" Pearce escaped and survived in the woods eating human flesh. In the present days, the researcher Nina organizes an expedition to Tasmania to proceed the work of her deceased sister Ruth and find evidences of the extinct Tasmanian tiger in the wilderness. She travels to a remote area with her boyfriend Matt and his troublemaker friend Jack that brings his girlfriend Rebecca and they spend the night in a village of descendants of "The Pieman". Sooner the quartet discovers that things have to stay hidden to survive. 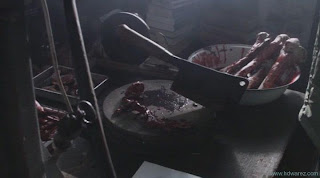 This is another entry in the After Dark Horrorfest

, and like some of the others it is definitely a mixed bag. Yes, it is far from perfect, but, I did enjoy watching it. Like many films from that region, the movie is chalked through with some great landscape shots, something that definitely adds to the creepy and foreboding atmosphere that left a very heavy feel throughout the flick. Yes, the plot was a bit cliché and really nothing new, although, there was a touch of suspense and gore inside that was nice. The acting was uneven, and the characters really did nothing for me, but I will admit that the ending, while predictable was entertaining. True this is not a perfect film, but I have seen MUCH worse. 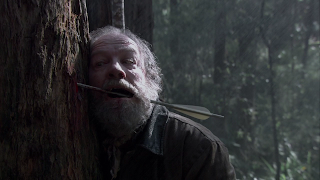