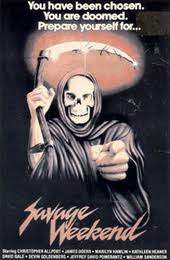 After finally finishing off the Horror: Do Not Watch Alone set (again), I dove into another set I have, the Drive-In Movie Classics box set for the 1973 forgotten gem Savage Weekend.

Plot/ Several couples head upstate to the country to watch a boat being built. Unfortunately they are stalked by a murderer behind a ghoulish mask. 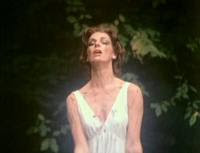 I do not know exactly what it was about this flick, maybe it was the nudity, and maybe it was the Halloween-like slasher element, who knows. But, I do know this was an interesting little slasher that goes almost unmentioned. Yes, some of it is really BAD, with the boom microphone making multiple appearances and terrible pacing for the first half of the film. Not to mention the kills are average with minimal gore. Yet, the acting is solid complete with some realism to the diverse characters, there is a combination of nudity and trashy sex scenes, and while decently easy to figure out, the twist ending seems to actually fit. Sure it is not for everyone, but fans of slashers and 1970s exploitations should like this underrated flick.