During a talk with my mother over dinner the other night, she raised the possibility of me doing some paranormal investigations for the local historical society. As some readers may know, at one time I had a chance to spend a lot of time in the field researching the different facets of the Cryptozoological or Paranormal realms. Unfortunately, over the past few months I have been limited in getting out as I am becoming used to my new surroundings now that I am retired. This conversation though sparked me to look at some of my past research, like this article on the famed Chupacabra. 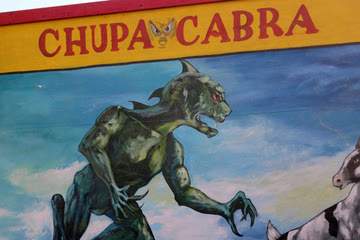 There is a mysterious creature roaming the wilderness throughout the vast reaches Spanish-speaking cultures. From Puerto Rico to , and to an extent, every country in between, this hated creature of the night has come from nowhere, to prey on innocent farmers and their livestock. This creature is the Chupacabra.

The name Chupacabra, translates to goatsucker in Spanish, was named by farmers for the creature's source of quarry in their earliest attacks. The Chupacabra's earliest victims were goats and other types of livestock. These attacks would happen at night, with the owner discovering their animals drained of blood from small puncture wounds in the neck early in the morning after an attack.

So what is the Chupacabra? As most cryptids studied in Cryptozoology, there have been no specimens recovered, leading to a wide variety of descriptions and theories to its existence. In most accounts, there are some similarities, so we will start there with our description.

In most cases, the Chupacabra is a bipedal creature roughly four to five feet tall. Most reports describe this fascinating creature as a cross between a "Grey" alien hybrid and a small erect bipedal dinosaur. The creature's humanoid appearance comes mostly from the size and shape of the head and eyes. The long oval-shaped head houses large alien-like red, or in some case black eyes. The creature is also said to have some vampire-like qualities, having four large fang-like teeth that aid it during its attacks. In most cases, this cryptid has two small arms with a three-fingered clawed hand, two strong hind reptilian-like legs. It also is said to have spinal quills line its back. Quills that some witnesses claim are used for flight.

One of the mot interesting facets of the legend of the Chupacabra is its ability to change colors at will. Most descriptions report that this creature is covered in thick black hair. In the dark, it will change to black or a deep brown color, while during the day; it will change to green, green-gray, light brown or beige, depending on its location and surroundings.

So where did this creature come from? The modern story of the Chupacabra originated in the small Puerto Rican , where numerous sightings sprouted up in the mid 1990's. However, in many ways, El Chupacabras was preceded by a Puerto Rican monster known as the Moca Vampire, which came to being during a UFO flap in 1975.

The sightings of the Moca Vampire are eerily familiar to those of the modern Chupacabra, where farmers discovered a large number of small animals and livestock murdered after a rash of UFO sightings. When these small animals were discovered, investigators discovered that they had been totally drained of blood. The only sign of this tragedy were small puncture wounds on the animals and strangely, they did not discover any signs of struggle.

These encounters started again in March 1995 and the legend of the Chupacabra was born. From that day until today, this legend continues to grow with the creature migrating as far north as the .

One of the more interesting facts discovered by researchers, is that the majority of attacks lead to instantaneous death to the prey, with an almost euthanasia technique, that limits the amount of suffering felt by the prey.

While there are many theories to what the Chupacabra is, I personally feel that it is a government experiment gone awry. It is a known fact that many large pharmaceutical companies are housed throughout Spanish-speaking locations and often fly under the radar when it comes to oversight, especially in the realm of genetics.

In some reports, even the government has dabbled into the area of genetic mutation. Could the Chupacabra be a genetic mutation of individuals exposed to a dioxin-based chemical agent and gamma radiation? Until one is captured we will never know.

Another popular theory has the Chupacabra being of Alien origin. In many cases, large triangular shapes and unexplained lights are seen in conjunction with sightings. Researchers have found that these cases have been documented throughout . To me, while interesting, the UFOs or triangular lights do not take the government off of the hook.

Throughout the years, some experts have claimed that the Chupacabra is nothing more then attacks from stray animals such as dogs or illegal exotic animals. Unfortunately, with the way the prey is euphemized. If wild animals were responsible, wouldn't there be more of a struggle and wouldn't the prey struggle to survive? Throughout my years of research, I have never found a wild animal had the ability to instantly kill its prey.

While I have yet been able to arrange a trip to Puerto Rico or in search of the Chupacabra, I maintain that something exists. Although, from a Cryptozoological aspect, I feel it is more of an out-of-control government experiment, with a sinister background.
Chupacabra Conspiracy Cryptozoology Haunted Times Magazine investigation paranormal SGRA Smoking Gun Research Agency Supernatural UFOs