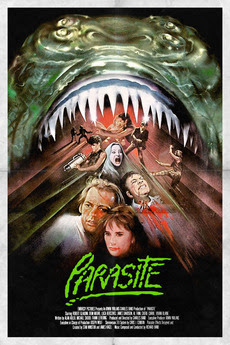 Okay, so I had to take a few days away with the Halloween Parade and finishing my final script for the radio-drama that I had been contracted to do. Although I was busy, I did have some time to get some movie viewing in. Next up on the docket is the 1982 schlockfest Parasite. 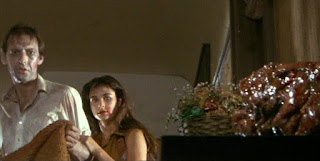 Plot/ Paul Dean has created a deadly parasite that is now attached to his stomach. He and his female companion, Patricia Welles, must find a way to destroy it while also trying to avoid Ricus, his rednecks, and an evil government Merchant. 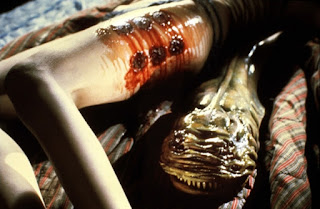 While no one will ever mistake this Charles Band movie for something great, it is one of his better entries, and one that I will admit seems to have gotten a little better with age. This schlockfest has everything one would expect from this era; splatter, gore, lasers, and a post-apocalyptic storyline that is all over the place. Straight from the age of big box horror, this entry does have some solid cinematography, over-the-top (yet bad and cheesy) effects, and some interesting performances (Demi Moore jumps out), but those positives do nothing to help offset the total film. The quality is bad, even calling this a B Movie is a stretch. The pacing is slow, it is predictable, and many of the 3D installments fall flat (this was during the 3D revival that took place in the 1980s). Still, this one, while it is bad, is one of those schlockfests that should not be overlooked and does have some entertainment value (especially with the whole 1980s feel in the future post apocalypse world of 1993).In the end, if you are in the mood for some no-thinking B-grade schlock give it a shot; if that isn’t your thing, stay away. 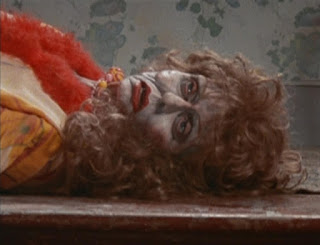