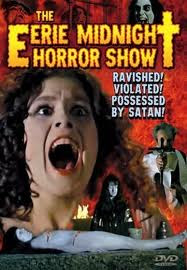 As many know, I love 1970s exploitation and horror, and sometimes flicks come out that should have / could have been much better. One such flick is the Eerie Midnight Horror Show (AKA The Tormented, AKA The Sexorcist, AKA Enter the Devil)  from the Pure Terror Collection.

Plot/ The story in this horror movie revolves around a strange religious icon and the demonic sexual influence it exerts on a young art student. After a gory dream sequence in which the woman imagines being nailed to a cross herself, the statue eventually comes to life and begins to sexually torment her.

This is one frustrating movie. Created as an Italian rip off of The Exorcist, this film boasts some very good moments and actually some originality. Unfortunately, all of that ends about the halfway mark (roughly 46 minutes into it), that is when the awesome Italian exploitation, horror and originality end and the Exorcist begins. In fact, in those 46 minutes, the pacing, effects, story and acting are so believable and entertaining that you truly expect a masterpiece (the S&M with long stem roses, the crucifix coming to life and the random sexploitation are awesome!). Once the filmmakers lose track of that originality and focus on ripping off the classic, the film becomes utter trash killing any interest that had been built by the genius of the first half of the movie. For serious horror and exploitation fans, I truly recommend the first 46 minutes of the movie. Sure, that will leave you wanting more, but so will watching the rest of the garbage that they added onto this one. 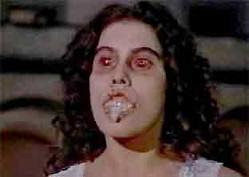