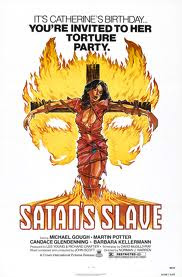 After watching some decent movies, it was time to get myself prepared for this weeks episode of American Horror Story (I am bummed, I missed last weeks and that halted my weekly review – but I will catch up Monday). So, I decided to sit back and watch some Satanic / Reincarnation goodness with the 1976 entry Satan’s Slave (AKA Evil Heritage)

Plot/ A young girl is caught up in a devil cult run by her evil uncle and cousin. She can trust no one and even people she thought were dead comes back to haunt her.

This flick was definitely one that I enjoyed. Any time you get bizarre twists with some mind-provoking imagery couples with equal amounts of nudity and bloodshed, you should have a winner. This one had all of that and more. In fact, other than some minor pacing issues and some strange illogical story twists that were a bit confusing, everything else worked. The acting and characterization were solid, atmosphere was creepy, the cinematography was on point and the effects were decent considering the age of the film (love the head smashing and pin to the eye). More importantly, the ending was quite an enjoyable twist that was not expected. In the end, this 1976 film seems to stand as a marker for the tragic end of the Hammer Horror monopoly, demonstrating that society had tired of the Hammer blueprint, and quality gore, horror and supernatural movies could come from other studio's as well. Overall, I would definitely recommend this one to horror fans or fans of the 1970s, and the great thing is, it is available for less than full price on a few Mill Creek Box Sets… A Win-Win for all!