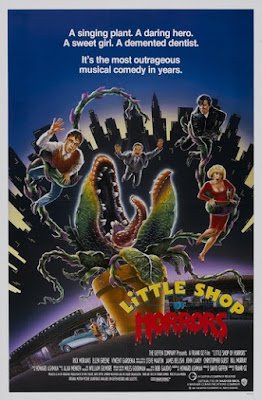 Last night, I went for something serious, and although it was entertaining, I decided that I needed something different tonight as the typhoon comes down outside. After some debate, I decided on the 1986 musical comedy Little Shop of Horrors. 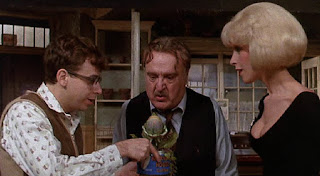 Plot/ A nerdy florist finds his chance for success and romance with the help of a giant man-eating plant who demands to be fed. 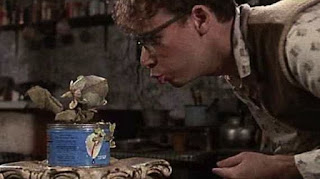 The world may be a much happier place if it were a musical. There I said it. While I understand the absurdity of that statement, I do also see the power of that platform. Yes, horror movies are hard to get right (although Cannibal the Musical was hilarious), but that genre also has a way (along with sci-fi) of being a solid platform for the comedic side of the genre. This entry, based on a classic Broadway musical, embraces that and creates a tremendously campy, comedy-horror combination that is both entertaining and memorable. This homage to the classic low budget schlockfests of the 50s and 60s features a great cast, perfect pacing, some awesome performances, decent effects, a hilarious storyline, and a musical score that is both catchy and darkly funny. Yes, it is schlock-filled, campy, and totally laughable and absurd, but that only adds to the comedic charm contained within the timeline. In the end, this is a movie that I feel has long been underappreciated and a movie that comedy, horror, and musical fans can enjoy. If you have not seen it, give it a shot. And who knows, maybe it will be a primer for the eclipse that sits upon our horizon in August.