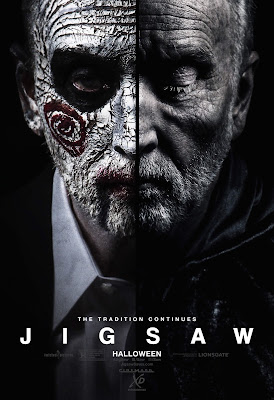 The weather outside today is absolutely miserable and I have until tomorrow for my trip to Haunted Hills Estates. While I could have sat and watched some type of horror flick, instead, I decided to head out to the theater to see the next entry in the Saw franchise, 2017s Jigsaw. 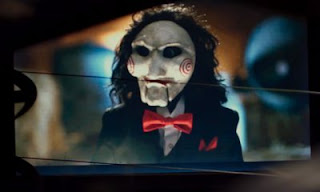 Plot/ Bodies are turning up around the city, each having met a uniquely gruesome demise. As the investigation proceeds, evidence points to one suspect: John Kramer, the man known as Jigsaw, who has been dead for ten years. 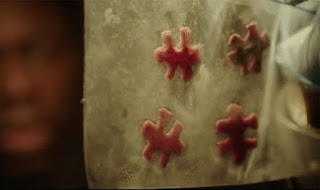 I was fun being back in the theater for one of my favorite franchises. For me, it has been too long, with the last time being for the Halloween re-release of the original a few years ago. While this one did not quite reach the level of the originals, there were many facets that left me again wanting more. The pacing was perfect, with the layered storyline continually moving forward instead of wavering during the non-action sequences, the storyline was interesting and tied into the series in a perfect way, the characters again were diverse and amazing, and the way the layers of the storyline worked together to create a subtle mystery was again refreshing. In fact, for me, those layered aspects of the story have always been one of the strong points of the series and often go unnoticed or are underappreciated by those that are watching the series. While all of those aspects worked, the performances were a touch uneven with the delivery of some of the well-placed humor in the script falling short, the graphic elements that made many entries of the original series were lacking by comparison, and the overall tension seemed a bit flat (which again falls on the uneven performances). In the end, while this one does not rise to the original Saw or Saw 3, it does do a great job at bringing the storyline back to life and hopefully, allow for more entries in this series. Is it perfect? No, but it was much better than many of the recent horror flicks I have seen over the past few years and a great way to bring some blood back to the Halloween season. Plus, it wasn’t PG-13, a fact alone that should make horror fans happy. 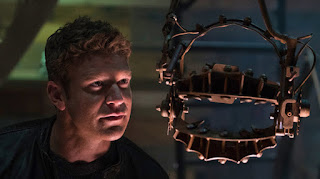