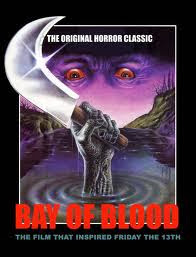 After spending a lot of time over the past few weeks living in the different post-apocalyptic worlds that grace our screens, I decided that I needed to go in some different direction on Saturday night. This was somewhat of a challenge as the kids would not go to sleep early and I had to stay awake. Once they were out, I decided to venture into the 1970s with the 1971 Mario Bava flick A Bay of Blood. 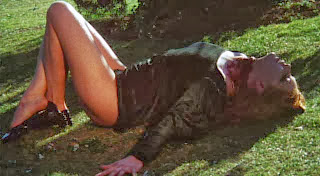 Plot/ An elderly heiress is killed by her husband who wants control of her fortunes. What ensues is an all-out murder spree as relatives and friends attempt to reduce the inheritance playing field, complicated by some teenagers who decide to camp out in a dilapidated building on the estate. 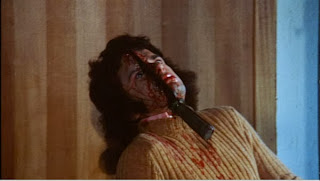 I always enjoy sprinkling in some Argento or Bava into my viewing, as I usually have an idea of what I am about to see. That was the case with this one, as it definitely had some of the trademark foundations that Bava was known for. Yes, it is not his best work. However, even though it has an aged feel, one can see the influence it has had on modern cinema. More of a slasher than giallo, this low-budget gorefest walks a fine line between elements of those movies. The acting was solid, the effects were subpar and there were some strange characterizations, but in the end it was the twisted and layered plot that took its toll. Honestly, it was way too convoluted for the short run time. In the end, this was an entertaining gorefest with enough blood to make horror fans happy. Not for everyone, but if you enjoy low budget slashers from the 1970s give it a shot.