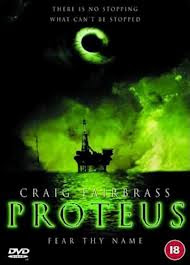 I really enjoyed my trip into the 1980s Sci-Fi / Horror genre last night with the flick Nightwish and decided to venture back into that genre again tonight. After some debate and reading (right now, Don’t Let the Revolution Start Without Me by Jesse Ventura), it was time to surf Netflix to see what I could find. What I decided on was from 1995, Proteus. 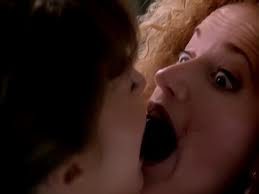 Plot/ Group of heroin smugglers finds shelter on abandoned oil platform after their ship had exploded. Soon they find that the oilrig was just cover for biological experiment. 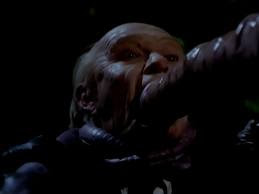 The Sci-Fi / Horror genre can be tricky to watch. There are so many elements that can pop up that make it a challenge to grasp at times. This flick, while far from perfect does a solid job at balancing the elements and not skewing it one way or another. The acting is solid, the cinematography good, and the soundtrack works really well with the overall lighting to create a dark and heavy atmosphere. Yes, there are some flaws as it lacks characterization, it is cliché, some of the scripting is off, the costuming and effects are dated and really show the impact of the limited budget that the film was made on and the creature really stands out in a bad way toward the end. That being said, this was actually a rather entertaining film that has just enough positive moments to make it a worthwhile watch, especially if you catch it on Netflix as I did. 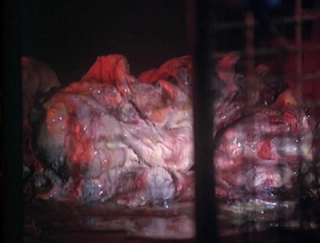