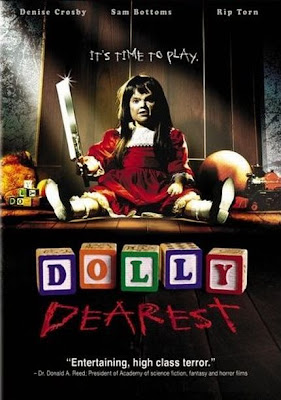 will face next weekend in the final four, it was time to settle down for the evening. What a better way than to continue what I started last night, watching some killer doll movies. Tonights entry the 1991 film, Dolly Dearest 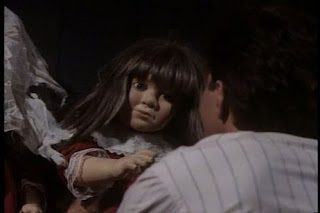 Plot/ In Mexico, an archaeologist releases the evil spirit of a devil child from a tomb of an ancient tribe called Sanzia that worshiped Satan on Earth and dies in an accident. Immediately after, an American family with two children arrives to live and reactivate a factory of dolls in a site nearby the archaeological field. Elliot Read invested the savings of his family in this business to manufacture dolls. He finds many dolls left by the previous owners of the factory, and gives one of them, which is possessed by the fiend, to his daughter Jessica Read. The girl changes her behavior, speaks an ancient language and the maid tells to the mother Marilyn Read. Meanwhile, the archaeologist Karl Resnick arrives to investigate the finding of his colleague. However, the demon has been already released, threatening the locals and the Read family. 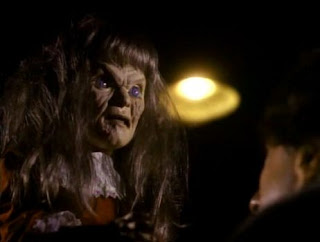 Set against the beautiful background of Mexico, much of the plot of this movie was involved with an ancient black magic curse associated with a pre-Mayan civilization, a subject that remains tantalizing on many levels. While the movie starts slow, you are rewarded with an outstanding film if you can stand the opening mnutes. Dolly is creepy and at times pretty scary, definitely on par with the much more famous Chucky

The characterization does a great job developing most of the characters, with the huge exception of the mother who seems out of touch despite being extremely paranoid. However, the script is definitely mediocre at best playing on the typical elements in many horror films.

At the end of the day, this is the decent little movie that offered more than I expected. YesI would have enjoyed more blood and gore, but you can't win them all. If you enjoyed Childs Play

(last nights blog), you will enjoy this.